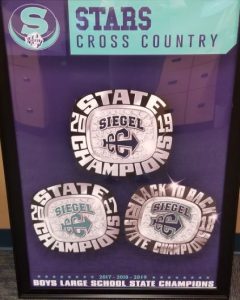 The elusive three-peat has not been done since the 2011, 2012, and 2013 Brentwood squads. Siegel becomes only the fourth large public school to win at least three straight state championships.

The Stars did what they have done all season with the leadership of the four seniors, Canaan Anderson, Jacob Boykin, Seth Robinson, and Emilio Vernon. They came to the race prepared and executed the race plan envisioned for them to perfection, in spite of the pressure of expectation to go for the three-peat.

“These young men raised the bar and earned this championship” said Head Coach Phil Young. “I am proud to a be member of this team and to have had the pleasure of getting to know our four seniors who led us to the 2017, 2018, and now the 2019 championship. This was the most challenging championship to earn and every team member knew what to do with selfless execution.”

The Stars top finisher was senior Canaan Anderson, who came in sixth-place individually with a time of 15:57.15. Teammate, Seth Robinson came in tenth-place with a time of 16:07:00. Both Anderson and Robinson earned All-State honors.

The Stars depth in their stacked roster was on display and last three scorers for Siegel would capture the title for the team, as their performances sealed the 3-peat.

The scoring may have been done for the Siegel boys team but Sophomores Caleb Jarrett and Brennan Thomas both gained valuable racing experience in the state meet. Jarrett finished in 48th place, 17:06:93 and Thomas finished in 73rd 17:26:07.

“The success of the Siegel Cross Country is not possible without the support of the great teammates, parents, coaching staff, and the administration of the Siegel High School,” added Young.

“It is important that we realize this is not possible without the coaches and athletes that have come before us at Siegel Cross Country’s history,” concluded Young. “They have laid the foundation for our success. To those that laid the bricks before us, you are with us every minute of this day and this championship is yours as well. We promise to keep representing our tradition at the highest standard.”